Valve’s Diretide event offers cosmetics, worth up to 400 dollars

This year for Halloween, Valve surprised the Dota 2 community with a month-long event, better known as, the Diretide. Alongside the fun game mode, players are keener on getting their hands on the cosmetics themselves, with some valuing up to 400 dollars. Over the decade of cosmetics, Valve’s policy of ‘adhering to hero lore’ has certainly loosened up for the better. This time around, they gave Sniper a complete Astronaut suit, reminiscence of the Starcraft game characters.

Sniper spots a sleek and futuristic spacesuit with a polished purple tint to it. However, the real deal is the skill customizations and particle effects that came along with it. Every active skill that Sniper has such as Shrapnel and Assassinate has a purple electricity vibe to it. If 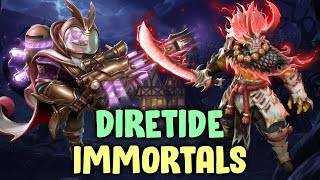 Over at the Steam market, the whole set goes for a whopping 400 dollars or an Apple iPhone SE2. Which, to be fair, the ‘Tales of the Ardalan Interdictor’ set is a collector’s item itself. The other alternative to obtain it is by winning a Diretide match, where only one of the five winning players will get a random treasure.

In this treasure, aka ‘Hallowed Chest of the Diretide’, there are more than 62 cosmetics up for grabs. The mentioned Sniper set, is reasonably the rarest drop, considering the quality and effects it came with. So, if you don’t want to spend 400 dollars, then you best pray to the gachapon gods for some luck in your next treasure opening.

Of course, we were also bummed to realize that the Sniper set cost as much as an iPhone. That aside, the Diretide event still offers tons of exclusive cosmetics for free. Players can play Diretide matches until December 22, but victory must be secured as well to be eligible for the 20% chance of obtaining the treasure every winning round.

Free cosmetics were also obtainable by playing Diretide (without opening the treasure). This includes a ghostly, ethereal effect for couriers and heroes to make the game more terrifying than it’s already. And the pumpkin heads! Ah, the traditional and culturally appropriate symbol of the spooky Halloween season, what more can we ask for?

We can always rely on the pros to show us the best ways to play new game modes. For instance, Nigma players, w33 and rmN-, took advantage of a bug, where tossing candies to your teammate repeatedly will heal you (and your ally) in every toss.

Since Diretide’s a game of wits and staying as long as possible in the lanes, this healing bug is definitely useful. Just make sure you don’t do that in front of your opponents as it’s pretty easy to replicate the stunt themselves. 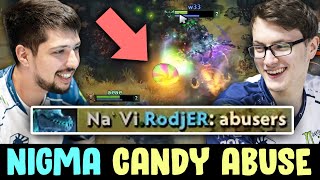 Anyways, bug abuse aside, the best way to win Diretide is to pick efficient pushing heroes and mobile heroes. When the enemy’s candy basket is exposed, after one of the towers is destroyed, damage dealt onto the basket would make candies spill out. When done at the nick of time, it can really turn the tides of a match, even if you aren’t picking up the candies yourself.

A good hero to pick would be Shadow Shaman, whose ultimate summons Serpent Wards. The Serpent Wards deal massive damage over time, and could instantly empty the enemy’s basket in mere seconds. However, the hero’s advantage in this game mode isn’t news, so chances are, it’s probably banned before you could decide to pick it.

Frankly, Valve’s Diretide event felt like a redemption arc for the gaming company, which has been under fire lately for their lack of PR comms and exclusive content for the withering player base. Hence, what better festive season to gather your party friends for rounds of Diretide.

Perhaps the Sniper set that everyone’s after is in your next treasure. Happy Diretide!

If you are interested in betting on Dota 2 with real money, do not miss our guide on how to bet on esports.

View all posts by Marcus