Norse mythology has made its way into our lives through a number of movies and TV shows such as The Vikings. Pretty much everyone nowadays will recognize names such as Loki and Thor which the northerners believed to be Gods who controlled the faiths of us, tiny men. Thunderstruck II Slot takes us back to that time through a number of graphically vivid and extremely enjoyable gameplay features.

Thunderstruck II is designed as a 243 Ways to Win slot, meaning all combinations from left to right will be paid, without respect to any particular pay lines. You may pick to bet anywhere between 1 and 10 coins in this game and the coin will be worth from £0.30 to £1.50, making possible bets anywhere between £0.30 and £15, perhaps barring the highest of rollers from this game.

The slot’s features are something completely new and different as the game offers multiple features and your choices increase as you play. The game offers two special games. A bonus game called Wildstorm can activate at random turning from one to five reels into Wilds. Additionally, if you can collect at least three Bonus symbols, you will activate The Great Hall of Spins, which will give you additional options the more times you activate it. We will go into more details on this later on. Thunderstruck 2 – Among The Most Popular Microgaming Slots

Thunderstruck is one of the most popular Microgaming slots and as such, it can be found in most Microgaming powered online casinos. If you are looking to play Thunderstruck II, take a look at the list below and you will find a number of Thunderstruck II casinos where you can enjoy this fantastic game.

Thunderstruck II is an All Pays slot where every possible left to the right combination will pay without discrimination. You will have to bet a minimum of £0.30 per spin and you can bump the bet up to a maximum of £15 per spin.

Paying slightly higher than 9 and 10 is the J symbol. This symbol will pay 7 coins when three are aligned from left to right, 15 coins for four and 125 coins for all five. The J symbol does not trigger any Bonuses or Free Spins.

The Q symbol pays identically to the J, paying 7, 15 and 125 coins for three, four of five symbols aligned respectively. The Q symbol does not trigger any Bonuses or Free Spins.

Next up is the K symbol, which pays 10 coins for three from left to right, 20 for four and 150 for five Ks aligned anywhere on the reels. The K symbol does not trigger any Bonuses or Free Spins.

The final letter symbol is the A, as it is in most slots. This symbol pays the same as the K symbol with 10, 20 and 150 coins being paid for three, four and five symbols aligned. The A symbol does not trigger any Bonuses or Free Spins.

Moving into the Norse mythology motivated symbols, we come across a Viking warship. Vikings were famous and feared for their sea fearing ways and their ships were the scourge of many other nations. Three Warships pay 15 coins, four pay 60 coins and five Warships pay 250 coins. The Warship symbol does not trigger any Bonuses or Free Spins.

Valkyrie is the first of the Norse Gods to appear in this slot and the least valuable of the four. Three Valkyrie on the first three reels will pay 20, four will pay 80 and five will pay 350 coins in total. The Valkyrie symbol does not trigger any Bonuses or Free Spins.

Loki is the next of the Norse Gods to appear in the game, and three Loki symbols will pay 20, four will pay 80 and five will pay 400 coins to the player. The Loki symbol does not trigger any Bonuses or Free Spins.

Another one of the more famous Norse Gods is Odin. Odin was one of the more powerful Gods according to Norse beliefs, associated with all kinds of superpowers and very involved in the lives of common men. Three Odin symbols pay 30 coins, four pay 100 and five pay 450 coins. The Odin symbol does not trigger any Bonuses or Free Spins.

One of the two feature games in Thunderstruck II, The Great Hall of Spins is triggered by three or more Bonus symbols appearing anywhere on the board. Once activated the game will give you a selection of bonus games to play as follows:

A single coin in Thunderstruck II can be worth between £0.01 and £0.05 which is the amount multiplied by the number of coins mentioned above. The minimum bet per spin however is £0.30 as the game provisionally charges 30 times the coin bet being a 243 Ways to Pay slot. Additionally, you may increase the number of coins up to 10, making a maximum total bet of £15 per spin. 243 Ways To Pay With Wild Symbols

The paytable in Thunderstruck II is very neatly designed and provides detailed access to all the payouts as well as the details of both The Great Hall of Spins and The Wildstorm Feature. The basic things to remember when playing Thunderstruck II are:

The Free Spins feature in Thunderstruck II is both very complex and exciting. It is one of the rare games where you get more options the more you play. There are a few important things to keep in mind regarding Thunderstruck II free spins: 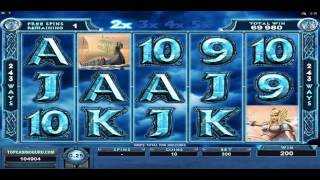 The graphics in the game of Thunderstruck II are motivated by Norse mythology, meaning you will be seeing plenty of Viking galleons and Norse gods made famous by the TV shows and movies about the exploits of the Viking people.

The graphics and animations are somewhat simplistic and the game can be a little slow at times when compared to some other popular video slots, but this does not mean that Thunderstruck II is any worse than the next game, only that there is room for improvement in the graphical sense. If you are a fan of all things Viking, you are bound to simply love Thunderstruck II.

According to an independent review, the Thunderstruck II slot pays back 96.65% of all the money that goes into it, which is somewhere around the middle ground when it comes to modern-day video slot machines. As the game does not offer any progressive jackpots, the variance is not too steep, but waiting for special features to get activated can take quite a while, especially in terms of time alone, as the game runs pretty slow.

Still, we don’t expect you will need too large of a bankroll to enjoy in the Thunderstruck II slot for quite a few hours before running out of funds if you get unlucky and can’t win. Combine that with one of the many casino bonuses offered by the Microgaming casinos, which you can compare in our Online Casino Comparison page and you should be looking at tons of fun with the Norse gods while playing this game.

As one of the most popular Microgaming video slots, Thunderstruck II is among those games available at the vast majority of Microgaming Casinos out there, many of which you can find on our Online Casino Comparison page. As a player at one of the Microgaming casinos that provide a mobile platform, you will be able to take part in Thunderstruck II from your Android and Apple powered mobile devices as well as Blackberry and Windows Phone if your casino supports these devices.

Thunderstruck II is in fact one of the better games to play on mobile devices as its relatively simple graphics and animations will not be too demanding on your mobile device’s graphical and processing units. If you are looking for an exciting and versatile slot with a fun theme and solid payouts, Thunderstruck II is the right game for you. Featuring a large number of possible special features, that include four Free Spins Bonus games and one random jackpot, the game is never dull for a single minute.

If you add to that the fact that the game has 243 regular ways to pay, with all lines paying and Wild symbols being fairly regular, there is little doubt that Thunderstruck II is one of those games that will capture your imagination and keep you playing for many hours.

The overall payout rate of 96.65% is pretty solid and the variance is not too bad either, so you should be able to last quite long with a relatively small bankroll. We hope this Thunderstruck II review has helped you understand the game better and learn to play it before even logging into a casino site.